LiDAR SLAM: what it is and how to eat it

SLAM - Simultaneous Localization and Mapping - is a process, or simply, a collection of algorithms in a sensor in a moving body (a robot, car, or drone) that maps an environment without prior information about it, while keeping track of its own location. LiDAR, in the other hand, is a sensor that detects objects and measures distance to them using light rays and measuring the time that it takes for them to reach an object and come back. Together, they make an excellent couple! in this article, we will try to brief you on LiDAR SLAM, its difference from GNSS and Visual SLAM, and how it can be used in different industries. Let’s dive in!

SLAM is often described as an alternative to a widely-used navigation system - Global Navigation Satellite System (GNSS). GNSS provides an accurate absolute positioning on Earth by using a constellation of satellites. However, it is not always precise and available in environments such as tunnels, caves, etc. Additionally, GNSS won’t be able to provide mapping, which is crucial in some scenarios. In such circumstances, accurately mapping an environment and navigating in it safely is achieved using SLAM. Mobile robots equipped with SLAM can be used in mining exploration, sea analysis, search and rescue, tunnel inspection, and so on. Main differences between GNSS and SLAM are summarized in the figure below: 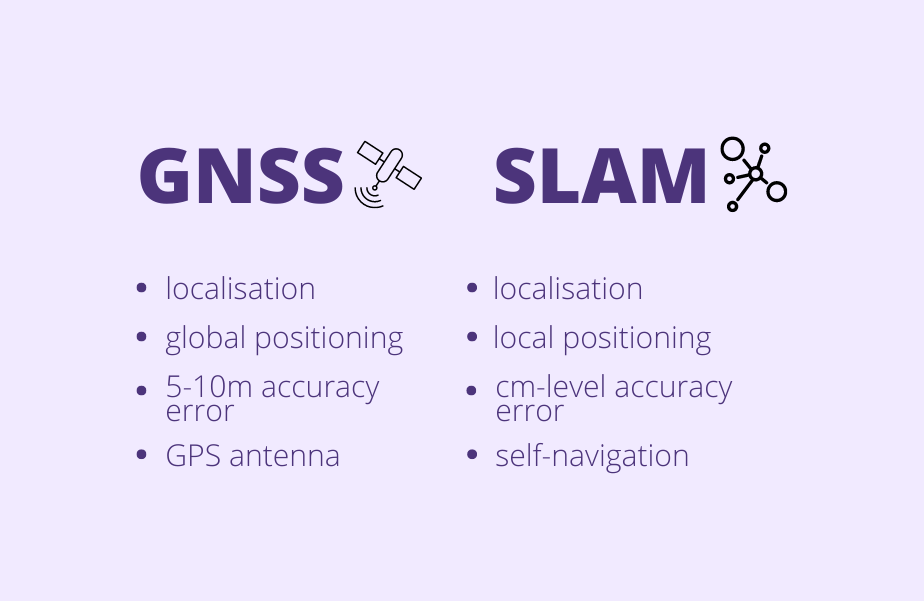 LiDAR SLAM is a navigation process that uses a LiDAR sensor as a means of environment perception and surrounding data collection. “Why not use visual SLAM?”, one may ask.

Visual SLAM (vSLAM) methodology adopts video cameras to capture the environment and construct a map using different ways, such as image features (feature based visual-SLAM), direct images (direct SLAM), colour and depth sensors (RGB-D SLAM), and others. One of the biggest challenges that researchers face when dealing with visual SLAM is the performance of robots in conditions with varying lighting and weather.

LiDAR, on the other hand, is a sensor that can successfully operate and obtain 3D point clouds that can be easily interpreted to perform SLAM regardless of illumination levels or weather conditions. Thus, LiDAR SLAM is the choice, when factors such as lighting and climate are present in the picture.

Today, LiDAR SLAM is the prime component of mapping systems dynamically, without the need of complex and heavy hardware setups. It saves resources (human, time, costs), and gives an opportunity to create mapping of an area beyond human reach. Kodifly has started to extensively utilise LiDAR sensors in the projects to bring value to its customers through innovation, impeccable expertise, and long-term impact. Respective use cases include railway localisation, passenger safety, intrusion detection, to name a few.

Having a technical description of LiDAR SLAM is good, but mentioning actual applications with real impact is better. So, how can LiDAR SLAM address the industry needs?

Individual problems require individual solutions. If you feel like your use case is different from what we have covered, don’t hesitate to let us know. We will be able to propose a tailor-made solution based on your goals and application needs, to eliminate your operational hurdles and increase process efficiency.

In this article, we try to brief you on LiDAR SLAM, its difference from GNSS and Visual SLAM, and how it can be used in different industries.

Not Finding what you want?

Mr. Muhammad Saad Shahid Anwel is awarded as The HKIE Innovation Award – Grand Prize for his leadership in developing the "SNAPP" robotic fish under BREED, The University of Hong Kong.

How can AIoT be applied in different industries?

AIoT (artificial intelligence of things) is IoT with the association of AI which combines IoT and AI technology. It can help to implement insightful data analytics for people to make more informed decisions.

Last week our co-founder & CTO Saad Shahid and our software development intern Destiny were invited to speak at a technical webinar hosted by the Hong Kong Institute of Marine Technology. Saad talked about AI, IoT and LiDAR based applications and their trends in the Marine and related industries. Webinar was followed by a Q&A session, where participants inquired further on use of LiDAR in government projects, sensors limitations in the water environment, and directions for further development.

Use of AIoT & LiDAR in the marine industry

In this article, we explore innovative approaches to use AI, IoT, and LiDAR-based systems in the marine industry, particularly in the Shipping Operations, Repair and Maintenance, and Safety. When it comes to the adoption of innovative technology, the maritime industry has long been an embodiment of the phrase “if it isn’t broken, don’t fix it”. However, both the unexpected global logistics crisis that followed the COVID pandemic and the improvement, on both cost and performance, that innovative technology has had on modern service processes in other industries have shown that the maritime industry needs innovation, fast.

Excited to announce our Lightspeed Retail partnership. Find us if you want to grown your business through an easy and fast POS!

Take a look at how Kodifly can optimise roadside operations by providing a Vehicle Queue Monitoring System!

Kodifly is an R&D Company and a Solution Innovator

We discover, design and develop state-of-the-art and tailor-made software solutions, and translate that into values for our clients.